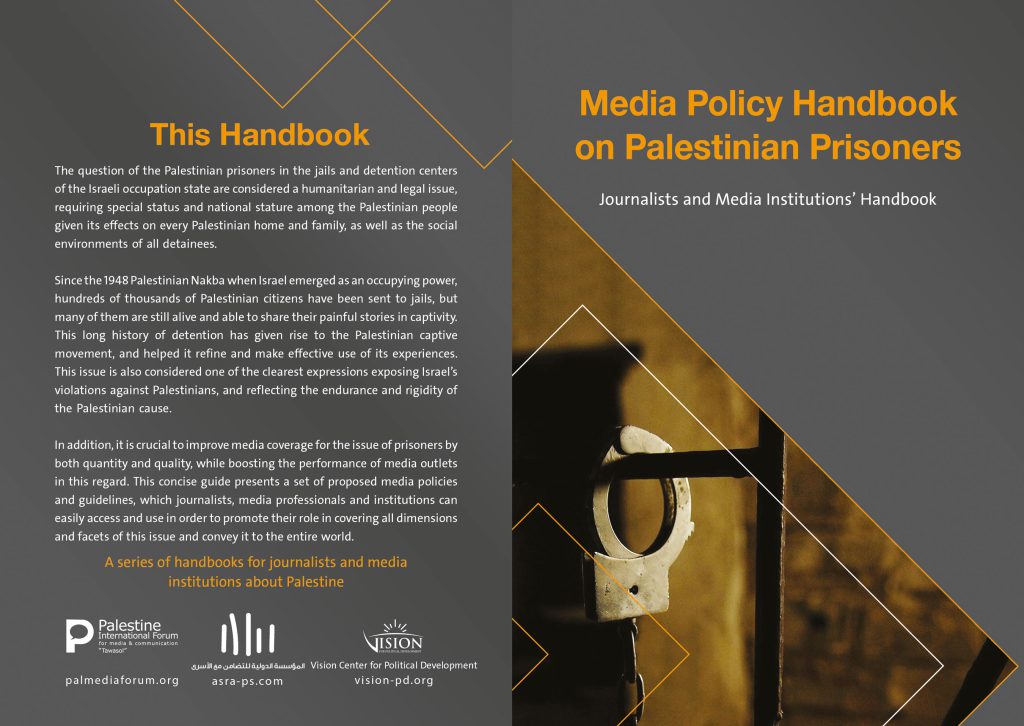 A handbook for media professionals, journalists and institutions covering Palestinians under Israeli incarceration.

Media framework and content policies for covering the prisoners’
issue

This guide presents best practices, media frameworks and policies concerning the handling of Palestinian prisoner-related subjects.
While the majority of these policies will be highlighted separately in the following pages, the most critical are:

The issue of the prisoners is multifaceted, and hardly monolithic.
Prisoners hail from different ages and occupational groups, and originate from different areas throughout the occupied Palestinian land. For this reason, nuances are essential when presenting the multiple media dimensions of the issue. It is important to take them into consideration during news coverage. The following examples underscore these dimensions:

Covering Palestinian prisoners from the perspective of international and humanitarian law

Covering Palestinian prisoners from the perspective of international and humanitarian law

The right to human dignity and freedom.

The right to protection against torture.

The prisoners’ right to a defense, receive legal aid and counsel from lawyers and be informed of any charges leveled against them.

The right to a fair trial and standing  before a legally-formed court of law.

The right to serve prison sentences in occupied territories and not inside Israel.

The right to a healthy diet.

The right to communicate with the outside world.

The right to pursue university and a high school education.

The right to receive new garments twice a year.

The right to receive appropriate medical treatment and regular checkups.

The right to go on hunger strike to pressure for demands.

The right to receive regular visits twice a month.

The right to meet with members of the family if they are detained in the same place.

The right to prepare food.

The right to practice religious rituals and play sports in places allocated for these purposes.

The right to be released after completing their terms of imprisonment.

The right to obtain freedom as part of any agreement between Palestinians and Israelis.

The right to return home and not be exiled after release.

The right to have access to financial needs and allocations.

The right to keep personal belongings without confiscation.

The right to not be exposed to raids on their cells, physical assaults or tear gas.

The right to not be exposed to strip searches.

The detained martyrs’ right to be returned to their families to receive proper burials according to their religions and traditions.

The right not to be locked up or isolated with criminals.

The right to spend some time every day in prison yards to get fresh air.

Media should rely primarily on a broad range of trustworthy, in-depth and wide-ranging sources with assorted ways and means of approaching and covering the issue of prisoners. Here, we present several determining factors on how to select news sources and resources, in this regard:

Dealing with Israeli news sources on the issue of prisoners

Dealing with Israeli news sources on the issue of prisoners

This guide proposes a set of media policies adding insight and context to global media discourse and content that reflects the reality of Palestinian lives under the yoke of Israel’s aggression and wars. These policies are as follows:

The scarcity of visual material is one of the most prominent difficulties facing the media when covering and reporting news about prisoners and detainees, and this is mainly due to the news blackout imposed by the Israeli occupation authority on incarceration conditions of prisoners and the severe restrictions on taking photographs of prisoners in jails. Therefore, several points should be considered when dealing with visual items. These include:

Actively covering and launching campaigns in support of prisoners

Actively covering and launching campaigns in support of prisoners

Concerned journalists and media outlets should pay attention to and focus on covering media campaigns that advocate the issue of Palestinian prisoners. The following are some ideas on achieving this: 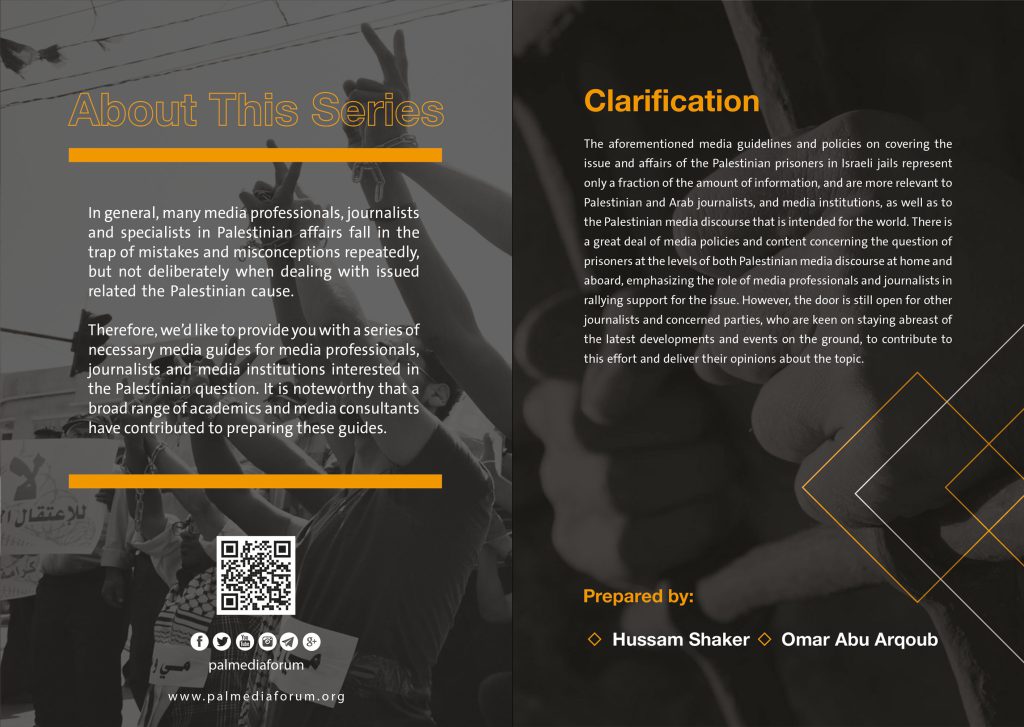